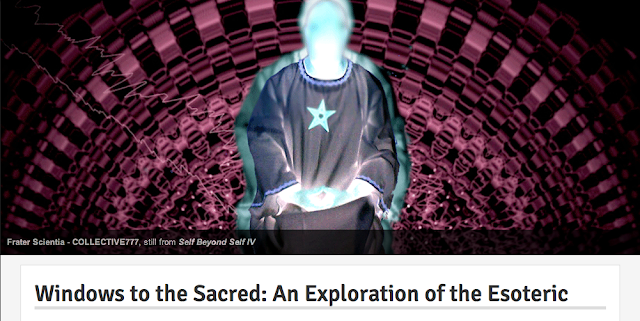 Windows to the Sacred: An exploration of the Esoteric includes major Australian artists such as James Gleeson whose works will be re-examined in the context of their esoteric influences. This unique exhibition includes key works by the English occultist Aleister Crowley and works by the infamous Australian artist Rosaleen Norton. Included in the show are works by Barry William Hale, Danie Mellor, Kim Nelson, Alex Proyas, Thor Engelstad, Austin Spare and music by Jeff Martin. American filmmaker Kenneth Anger, English filmmaker Harry Smith, along with NOKO and Masonik have contributed film installations. A highlight of the exhibition will be the installation of a Gnostic Temple by Collective 777.
Curated by Robert Buratti, one of Australia’s leading experts in the area of esoteric art, this extraordinary exhibition brings together work previously shown at the Pompidou Centre, Paris. “Esoteric art is essentially focused on man’s search for hidden knowledge of himself and his place in the universe. It’s a fascinating genre that attracts worldwide interest from collectors and institutions”, says Buratti.
In 2008 the Pompidou Centre, Paris, staged the exhibition Traces of the Sacred, which examined artists engaged with the exploration of the sacred in art. Throughout history artists have represented spiritual themes; in the past this meant producing overtly religious works but in the 20th century when organised, mainstream religion lost its influence over artists, they didn’t abandon the idea of the sacred entirely — they just discovered new ways to explore the basic human urge toward transcendence.
Windows to the Sacred: An Exploration of the Esoteric is a multi- disciplinary exhibition, offering an audio and visual exploration of the existence of a universe beyond our world.
Presented in association with Buratti Fine Art

Public Programs
Sunday 1 September, 3pm - Curator’s Floor Talk with Robert Buratti
An Introduction to Esoteric Art, by Robert Buratti and artist talks, followed by a performance by NOKO.
Sunday 15 September, 3pm - Gnostic Mass and talk by Stephen J King
A talk on the Gnostic religion and live performance of the central spiritual rite of the Ecclesia Gnostica Catholica Church of the Ordo Templi Orientis,a rite developed by Aleister Crowley, to be performed in the Gnostic Temple.
Sunday 29 September, 3pm - Artist Talk with Danie Mellor and Barry William Hale
Meet artists in the exhibition and join Danie Mellor and Barry William Hale for a discussion about their works in the show. Complimentary glass of champagne to celebrate closing day.
* Speakers subject to change without notice
Posted by Masonik at 12:48